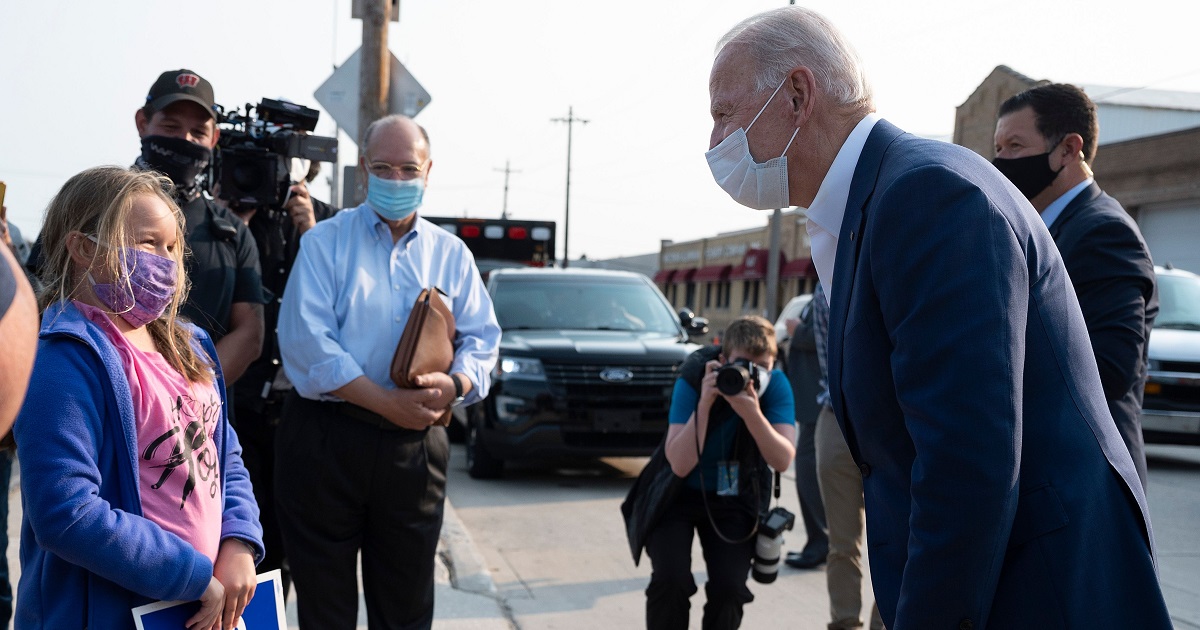 But video from local reporter Haley BeMiller shows both sides of the street, and there is a contingent of Biden supporters that’s clearly larger than the Trump gathering.

I’m in Manitowoc for Joe Biden’s visit today, the first of a few campaign stops in Wisconsin this week. Both Biden and Trump supporters are outside to greet him. pic.twitter.com/mWPy1sk80m

Supporters of both Former VP Joe Biden and President Trump are out in Manitowoc today ahead of Biden’s scheduled event at the Wisconsin Aluminum Foundry.@WFRVLocal5 pic.twitter.com/m3KrYgbyTY

Supporters of ⁦@JoeBiden⁩ chanted “Donald Trump has got to go” to counter Trump supporters outside of Biden’s event in Manitowoc, WI. pic.twitter.com/YgtW60vf5w

Now, a Trump campaign surrogate has no duty to show crowds of her opponent’s supporters, but an unsophisticated social media user might be left with the impression that the former VP was deluged with MAGA hats and flags when he visited the crucial swing state — one in which he holds a significant polling advantage.

That’s certainly the point of the kind of “earned media” that the Trump campaign uses, to give social media users whichever impression they choose to — often ones that aren’t true. It’s debatable how much getting mocked about boat parades or slapped with Twitter terms of service violations or manipulated media tags helps or hurts Trump — normal people may recoil, while fans and lower-information voters may be energized and/or influenced — but there’s a clear imbalance when it comes to this sort of engagement.

In addition to drawing a larger crowd of supporters outside his event, Biden did a clutch of local media interviews with some news-making sound bites. After the event, he spoke to and posed with supporters, including some adorable kids. Some of that was captured by pool cameras.

Joe Biden spoke to and took photos with supporters in Manitowoc, Wisconsin. pic.twitter.com/Hv7iUoswh7

One such interaction, recorded by pool reporter Ken Thomas of The Wall Street Journal, couldn’t have been more perfect if it had been written by a West Wing fanfic magazine:

Mr. Biden then spotted a little girl a few feet away from the group that had gathered near him. “Hi, honey, how are you? What is your name?” Mr. Biden called out.

But a woman standing closer to Mr. Biden didn’t realize he was talking to the little girl. “Mine?” the woman asked. “Rita.” Mr. Biden smiled and awkwardly replied, “Oh, ma’am, I wouldn’t call you honey, Rita. Hi Rita.” The group laughed. She said she was “a big AFSCME person,” referring to the union.

Mr. Biden said he was “talking to the young woman behind you.” The girl approached him and said, “I’ve never met a vice president before.” Mr. Biden said, “well I may be speaking to a future president in you.” He asked her name, but your pooler couldn’t hear it. She told Mr. Biden was 10 years old and then they took a photograph.

Whoever posted pool video for The Hill looks to have cut out all but the tail end of that made-for-TV interaction with the young girl.

You wouldn’t know any of that from looking at the Biden campaign/surrogate Twitter feeds, which is a huge missed opportunity from a campaign that has struggled to generate earned media — ironically while reaping outsize benefits when it has.

Two extremely powerful earned media moments come to mind. One of them was the impromptu meeting between Biden and security guard Jacquelyn Brittany that was included in The New York Times‘ video package of their editorial board meeting with Biden. The clip became a sensation, and Jacquelyn ended up nominating him at the Democratic National Convention.

The other was a 15-second clip of the former veep riding his bike and trolling Fox News reporter Peter Doocy, a spontaneous moment that cut against Trump’s attacks on Biden and set social media ablaze.

Neither of those moments could have been planned, which is all the more reason why when these opportunities present themselves, they need to be seized. Especially when you don’t have to lie in the process.

This is an opinion piece. The views expressed in this article are those of just the author.